We Are the Answer We Seek

I have been grieving over the last few months. African Americans have watched their friends and family members die at higher rates from the coronavirus. I have watched news reports of people who look like me gunned down while going for a jog, murdered in their homes, threatened while bird watching in Central Park, and mercilessly choked on camera. I’m heartbroken for the families of those who lost their loved ones senselessly. The uncertainties that were already brewing for so many people during COVID-19 are multiplied exponentially by the extraordinary pain and division we are witnessing across the country. I’m troubled yet hopeful when I think about Marian’s staff, the future of Marian Girls and the future of the work we share.

We are a diverse culture, and the depth of our collective pain may vary among us. However, I am grateful Marian was founded on the core values of fostering justice, peace, and equality. I’m grateful we can stand as a model for others. I am mindful standing for justice requires affecting change outside of our own boundaries. While I am disheartened by the violence and devastation that I have witnessed in recent days, I understand the pain and frustration behind the protests. The outcries are an agonizing reminder of the generations of systemic racism.

Watching the coverage of what is happening in response to the brutal murder of George Floyd, I am reminded like many others of the countless men and women killed by law enforcement officers and those “acting” as law enforcement officers, most recently Breonna Taylor, Tony McDade, and Ahmaud Arbery. This is not about pointing the finger at all police. My father was also a policeman. He was one of the first African American men to serve on the St. Louis Police Force. He had a fearless reputation, which was in sharp contrast to the expectation of a black officer “knowing his place.” You can only imagine what he went through to protect and serve the community in spite of the attempts to marginalize him at work. My cousin is still on the police force. He works undercover so he doesn’t wear a uniform. His hair is in dreadlocks. On or off duty he is committed to protect and serve our community. When he is viewed through a racialized lens he is considered a threat to society rather than someone who helps us sleep safely at night.

This should be a tipping point in our history to NOT ignore the reality that every social justice movement from women’s rights to civil rights to immigration rights has been catalyzed by longstanding inequities. This is a moral moment, and a call to action that even the youngest among us understand.

My granddaughter is the age of a middle school student. When George Floyd was murdered, her immediate response was a desire to join the protesters in honor of Mr. Floyd and his family. She considered his family’s loss her loss as well. In the days following his death, she was traumatized by the news coverage of peaceful protesters attacked with batons, tear gas, Tasers, and rubber bullets, and then arrested. She wondered, what is the point of going on if this is what the future holds for me?

As she asked that question, I not only held her distress in my heart, I also considered the 200 Marian Middle School students and alums who may have the same burning question. All children should have greater aspirations for their future well beyond surviving to see another day.

The recent atrocities are the same issues that are grounded in unyielding — and sometimes not easily detectable — racism. It is the root cause of the civil unrest by people struggling to breathe. Addressing it requires broad-based sustained change that addresses the impact of racism on housing, health, educational, and criminal justice disparities.

The questions before us are: How do we work together to create a more equitable and just society? How do we stand up against leaders who express full-throated resistance and blatant disregard for the plight of those who lack adequate access to resources or to economic or political power to help themselves? How do we overcome the structure of policing that is tethered to violence against indigenous and enslaved populations from which it emerged?

It is vitally important to stand with advocates who are calling for an end to structural inequities and the creation of more equitable conditions in our communities. Marian is a beacon of light, a catalyst for hope, and a bridge between communities where barriers once stood. We must continue to support each other. In our shared role as educators, I encourage you to continue to teach our future leaders about historic and contemporary heroes and “sheroes” in our society who look like them and conversely share the harsh truth of those who have worked to undermine their achievements. Let us work together to support our Marian culture that values and advances equity and inclusion, fosters access to economic opportunity and pathways to success, utilizing innovative strategies for engaging community and communicating with transparency.

We must discipline ourselves to look into the light of hope with courage. We are not helpless. We are not hopeless. We must commit ourselves to live in the light of hope that unleashes the power of hope. Hope tells us anything can be transformed. We are the bridge builders, grace givers, freedom fighters, healers, and truth tellers. Our only option is to come together as one, respect each other, and reimagine a new reality where all lives are valued, and everyone thrives. Our future and our country depend on us coming together as One. It is up to us to make the change. We are the answer we seek. 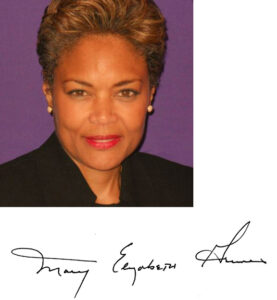